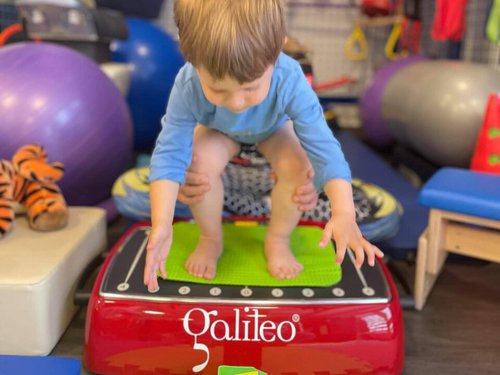 The principle of Galileo is based on the natural movement of the human gait. Galileo's side-alternating motion is similar to a see-saw movement with variable amplitude and frequency and therefore stimulates a movement pattern similar to human gait. The rapid movement of the training platform causes a tilting movement of the pelvis, just like when walking, but much more frequently. To compensate, the body responds with rhythmic muscle contractions, alternating between the left and right side of the body. Galileo Training simulates human gait in a physiological way.

Only by this side-alternating movement during Galileo Training is the spine stimulated by a slight lateral tilt of the pelvis. The spine is not compressed as with a vertical movement on the training platforms. The physiological stimulation of the spine by the side-alternating function of Galileo allows the back and abdominal muscles to be targeted.

Galileo Training produces similar stimulus patterns used when walking, in addition to the basic muscle functions itself, the interaction between different muscle groups and their coordination is developed perfectly resulting in an increase in muscle power.

As humans, we attempt to keep the head in a steady and upright position as the balance and visual systems function optimally only when in a state of rest. Due to the design of the machine, no significant vibrations are transferred to the head during Galileo Training because the training platform only simulates human gait. The body, therefore, is able to maintain a stable torso and head.

I agree We use cookies to ensure that we give you the best experience on our website. Please confirm you consent to receive all cookies.
Find out more